Miami area residents will be pre-gaming the Super Bowl by protesting a potential F1 race against what they’re calling “environmental injustice.”

The protestors who to bring attention to what issues an F1 race could cause to the thousands of Super Bowl attendees who will undoubtebly be sitting gridlocked with their cars idling gazing at the protestors. 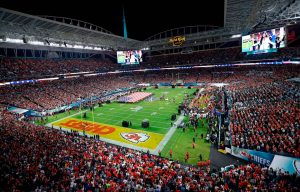 Among the concerns residents have are “air pollution, noise pollution, and road closures.” Valid concerns if this was a facility that wasn’t hosting world-class events like say, the SUPER BOWL.

F1 cars do create exhaust pollution. Twenty F1 cars running for 6.5 hours max over a three day period won’t even come close to the same environmental damage hosting the Super Bowl at Hard Rock Stadium will do. Your average golf course does more damage to the environment each year than F1. Attack Tiger!

To their credit F1 has become more environmentally conscious. Teams jointly fly to races with one another, cargo planes are used to minimize the travel of equipment. There is no refueling done during races which is more for safety but does also help the environment. Some drivers have requested electric vehicles. Not to mention the cars are turbo-hybrids as well.

Six hours of on-track action over a 72 hour period will have no effect on anyone’s health unless they have their mouth wrapped around the exhaust pipe of McLaren. So toss out the air pollution argument, it’s dead.

“It threatens the severe disruption to normal life,” he said, “and the noise inflicted on the people is undoubtedly at a level that threatens hearing loss.“

Studies have shown links between noise pollution and health problems. Formula One cars generate more than 130 decibels of sound at close range, according to a September report by the auditor for the Miami-Dade Board of County Commissioners — more than a rock concert, and nearly as much as a jet engine. Health professionals peg the top of the safe noise range at about 70-75 decibels.

At no point is the noise level loud enough to inflict hearing loss to those outside the circuit in their home. The 130-decibels cited above had to be for V8-era cars. Are F1 cars as loud as jet engines? “Not even close.”

Like anything with noise the further away you are the quieter the sound is. The nearest homes are a quarter-mile away behind a tree-line. The next closest is over a canal. Noise pollution isn’t a legit concern.

Roads get closed all the time for nonsense. The circuit is all contained inside the property at Hard Rock Stadium there should be no road closures.

0-3 on complaints so these people are spending their Sunday protesting nothing.

Listen we all can get behind a cause if we don’t like something and these are people that feel like the Dolphins have taken advantage of the neighborhood for years. Being oppressed by a billionaire has to get annoying so you can understand their frustration. However, don’t makeup lies when the Super Bowl is being held there with just as much pollution if not more happening.

Could Williams Be Shopping Lance Stroll?