ESPN might not care about NASCAR anymore, they might not know the Indianapolis 500 happens on labor day but I’ll be damned if they don’t know how to keep F1 fans happy. The worldwide leader announced that they will once again show F1 races commercial free in 2019.

Per Adam Stern, because why wouldn’t he have the news, Mothers car products will return to present all 21 rounds commercial free.

ESPN’s F1 coverage debuted in 2018 with a disastrous Australian Grand Prix. No sound, no picture, commercial breaks randomly thrown in at the most awkard times. ESPN said they’d make it right, and they did.

The rest of the 2018 season was presented commercial free. At first ESPN didn’t announce the change and fans took to social media asking others if they had a seen a commercial yet. It was like we all saw Birdbox and were looking for answers just we could see and Sandy Bullock wasn’t screaming at a child.

ESPN sticking with this commercial free concept is fantastic. They pay nothing for the rights to broadcast Sky Sports telecast of the race. Meaning any money from advertisers is straight profit. Why not make a little cash from Mothers while also using the race to lead into other shows on the network? It’s fantastic. 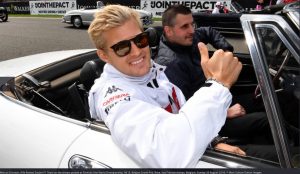 Now if we could just get FOX and NBC to revolutionize the way they present races we might actually get to see some action. Obviously they’re locked into contracts but you don’t miss a minute of a soccer game. Why is it ok to miss 30% of a race?

In the meantime go out and buy some Mothers car products and watch commercial free F1!

Richard Petty Motorsports Are Selling Cars, The Manufacturer is changing