Apex off » Breaking Down Each State’s Favorite Racing Series

what is the most popular racing series in each state?

We can finally answer the age old question, what is the most popular racing series in each state?

Every race fan has their favorite series, from NASCAR to Indycar, F1, IMSA, World of Outlaws, hell some even like the W Series. So what is the most popular series in your state? Take a look.

Now that you’ve become enraged with what your fellow citizens have picked, take a look at the break down and reasoning that the fine people at the Public Information and Sports Statistical Society told us.

IndyCar’s annual trip to Barber Motorsports Park has really given the series an inroad to the hearts of Alabamians. Talladega is great, and NASCAR was a very close second. But the deep south is IndyCar country.

America’s honorary Canadian’s are big fans of the tin toppers.

JJ Yeley is the reason Arizone went to IndyCar. He still has a massive fan base in the state.

You really thought the state that elected Mike Huckabee wouldn’t be NASCAR fans?

Bit of a shocked that California went to NASCAR. If you’ve ever been to eastern California you’d know why.

With all the tech bros that are moving to Denver it’s not a shock the ‘rado is an F1 hotbed.

A Florida man is required by law to like NASCAR.

Gene Simmons wanted to bring an IndyCar race here. Hawaii was just happy someone remembered them.

Brian Scott’s years in NASCAR couldn’t sway Idaho. His wife is going to be PISSED.

Illinois does host an IndyCar race but Chicagoland

Hoosiers are going to be big mad but numbers never lie. Indiana is a NASCAR state.

Iowa host one event all year and it’s the Knoxville Nationals, no surprise here.

Kansas Speedway, actually in Kansas unlike their city. NASCAR through and through.

The commonwealth loved their IndyCar races at Kentucky Speedway apparently.

You think those crazy cajuns would like anything other than NASCAR?

Big DTM fans up north, not sure they even know about IndyCar or NASCAR.

IMSA gets another one! Crabcakes, football, and Porsche 911s that’s what Maryland does.

Home to Chevy and Ford two NASCAR stalwards, but the fine people of Michigan appear to like German cars more than their own. Sad.

Honest question, does Minnesota even know we race cars in this country? NASCAR fans regardless.

When they get the rabbit ears to pick up the broadcast Mississippians are big NASCAR fans. Remember the proposed Jackson track?

Hannibal, Missouri is a huge hotbed for the Japanese Super GT series. Go there sometime.

World of Outlaws gets another. Solid chance the militias in Montana saw the word “outlaws” and just picked that.

Larry the Cable Guy would disown Nebraska if it wasn’t a NASCAR state.

The stats here are flawed. They only asked people on the strip wearing aviators, but F1 was the winner.

They’re just saying NASCAR so they don’t lose their race.

If there’s one thing about Jersey people it’s that they love getting dirty. World of Outlaws gets another.

After disowning Little Al the only choice was NASCAR.

NASCAR’s home has turned on them. IndyCar has done a great job infiltrating the enemies territory.

Supercars! The 8 people that answered the phone call all picked Supercars. We aren’t sure why.

Big Dave Blaney fans in Ohio, NASCAR was always going to be the pick.

You may hate Pocono but Scranton doesn’t.

IMSA picks up the smallest state in the union. Just happy the society remembered to call them.

How is F1 the most popular? You ever been to Florence, SC on a Sunday morning? Hit up Minnie’s and then come talk.

Between Nashville and Bristol, NASCAR is dominating Tennessee.

COTA hosted Supercars one time and it made a LASTING impression.

Mormons and Southerners have a lot in common, no mistake that they’re both NASCAR fans.

VIR host IMSA and the fans have responded.

They have a hard time saying Ricciardo and Raikkonen but boy do these hill people love watching them cars zoom.

There isn’t much in Wyoming but they know a good stock car when they see it.

Ferrari Already Has An Option On Daniel Ricciardo For 2021 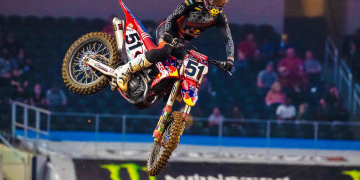 Ferrari Already Has An Option On Daniel Ricciardo For 2021

Sounds Like Roush Fenway Will Close Their Xfinity Program